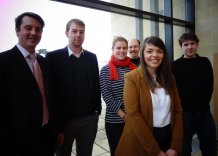 The theme of this year's IAIS Careers Day was "Careers and Further study with an IAIS degree".  At this event, a number of alumni were invited to return to the University of Exeter to speak about their different career paths, all of which had involved some form of further study. The career directions of the panel members varied from arts and culture to due diligence analysis. The panellists answered questions and talked about their own career journey, giving tips to current students.

Ross Martyn-Fisher, (Arabic and Middle East Studies, 2011), an Analyst with Stroz Friedberg explained that there were graduate jobs available for which Arabic communication skills were essential. "I use my Arabic on a daily basis and that I have to constantly keep on top of both political and business developments in the Middle East."

On the topic of further study, both Tobias Borck and Aimee Dawson confirmed that gaining further qualifications is beneficial to building networks and to gain expertise in certain areas. Tobias has previously completed a BA in Arabic and Middle East Studies (2013) and an MA in Applied Security Strategy (2014). He currently works as a Research Analyst at the Royal United Services Institute (RUSI). Aimee is currently the Editorial Assistant at Ibraaz, a leading critical forum on visual culture in North Africa and the Middle East, where she writes for and edits online and print publications. Aimee (Arabic and Middle East Studies, 2013) is also currently studying for her Masters in Contemporary Art and Art Theory of Asia and Africa. Her advice to current students is:

"I got involved in societies such as Art Soc and Arabic Soc, and by working on small events there managed to develop projects outside of university and make great contacts. I also sought out work experience by helping out in the Street Gallery at the IAIS and undertook an internship in London in the summer. I also took advantage of other opportunities such as the Exeter Award, the UKEIRI study programme and various scholarships - the more experience and demonstrable skills you have the better!"

The careers day concluded with an afternoon tea reception where students had the opportunity to ask their individual questions to our alumni. Ben Lydon, (BA Hons French and Arabic, 2010) now works as Chief of Operations Officer at the Arab Reform Network, an NGO based in Paris. He was able to give advice to students about working abroad on completion of the degree, and on getting involved with charities and humanitarian work, which is a popular career choice for undergraduate students.