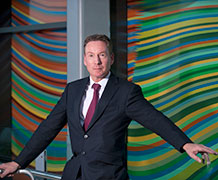 BBC expert considers what became of the Arab Spring

The Arab Spring in the Middle East failed to deliver on its early promise, BBC Security Correspondent Frank Gardner OBE told a packed audience at the University of Exeter.

Frank, who is an Exeter graduate, explained how even he and other journalists shared in the “naïve optimism” generated when the Arab Spring started in 2011. Three years on and it was now met with “hopelessness,” “despair” and even “disgust” by people in the region.

“It very rarely gets a positive response,” he said.

Before an audience of more than 300 people in the Alumni Auditorium and responding to audience questions, Frank offered his analysis of the situation in Egypt, Syria and the wider region.

He did not believe the West should see the Middle East as a threat to security but was concerned about the hundreds who had travelled from Western countries to fight in Syria. He felt they were becoming so “brutalised” by their experiences with a far lower “threshold of violence” that a proportion might seek to continue their conflict on returning to their home country.

Despite insecurity and conflict across the Middle East, Frank felt there was room for hope, with some autocratic rulers already choosing to moderate the way they govern. The Arab Spring, which he said had its origins at the time of the withdrawal of colonial powers, isn’t over.

“Eventually, hopefully, one day the Middle East will be fairly governed,” he said.

Vice-Chancellor of the University, Professor Sir Steve Smith, who was at the event, said: “We’re extremely grateful to Frank for giving up his time to share his great depth of knowledge of Middle Eastern politics, and his sheer passion for the people of the Middle East really shone through.

“Every time we see him on the BBC we feel incredibly proud that he is an Exeter graduate and I was delighted to hear that he loved his time as a student here.”

The event, which was attended by students, staff, graduates and local residents, was chaired by Professor Rob Gleave, Professor of Arabic Studies.

A recording of the event is available.