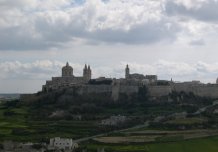 The Mdina Archives in Malta offer historical accounts dating back to the early 17th century (photo from D.A.Agius)

In a cooperative project titled Magic in Malta 1605: The Moorish Slave Sellem Bin Al-Sheikh Mansur and the Roman Inquisition, Professor Dionisius A. Agius (Arab and Islamic Studies) and Dr Catherine Rider (History) have been awarded over £200,000 of AHRC funding, supported by Research Fellow Dr Alex Mallett.

Beginning 1 July 2014 to the 30 June 2016, Professor Agius and Dr Rider have been awarded £233,831 from the AHRC, a national funding body which seeks to financially support and promote Arts and Humanities research projects across the UK.

This study seeks to investigate the causes, attitudes and consequences of the perceived practice of magic in Malta, focussing on the Roman Inquisition 1605 trial of the ‘Moorish’ slave Sellem Bin al-Sheikh Mansur, who was accused and found guilty of practising magic and sentenced to solitary confinement.

In an attempt to understand and explore the enduring fascination with magic, Professor Agius and Dr Rider have been granted access from the Cathedral Archives in Mdina, Malta to interpret Latin, Italian and Arabic manuscripts detailing the events of the Inquisition court proceedings dating from 1561 to 1798. These manuscripts reveal a number of criminal charges held against Sellem Bin al-Sheikh Mansur, relating to apostasy, possession of prohibited religious literature, witchcraft and magic.

It will consider the findings of the proceedings exploring religion, society, and politics on Malta and across the Mediterranean in the early 17th century, as well as aspects of magic in both European and Islamic contexts. It is hoped that this new study will identify the causes, attitudes and subsequent consequences of the perceived practice of magic in Medieval and Early Modern Europe and the contemporary Islamic world.

Dr Catherine Rider said of the project: “By making a previously unpublished and largely unstudied trial record available in English, we’re seeking to explore a wide range of important issues connected with the history of magic, the interaction between Christians and Muslims in a multi-faith society and the ways in which the Inquisition tried to police the boundaries between Christianity and Islam.”

She added: “The record has never been published but it tells us a lot about the history of magic and also about the interaction between Christians and Muslims in Malta.”

With the aid of Research Fellow Dr Alex Mallett, this study follows on from Professor Agius’ previous British Academy sponsored study of Georgio Scala and the Moorish Slaves, an inquisitional document also found at the Mdina archives (published by Malta: Midsea, 2013).

Speaking of this collaborative partnership, Dr Catherine Rider noted: “the benefit of working collaboratively between IAIS and History is that each of us on the project is able to bring a different set of skills. This is particularly important because the trial record is in three languages: Italian, Latin and Arabic. We are excited to see this project progress.”

For more information related to this project, please visit the College of Social Sciences and International Studies research page.