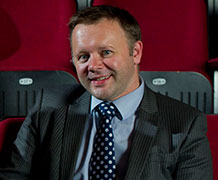 A University of Exeter, Middle East political expert features heavily in a new report by the House of Commons Foreign Affairs Committee on ‘UK Government policy on the Kurdistan Region of Iraq’. Professor Gareth Stansfield from the Institute of Arab and Islamic Studies and Strategy and Security Institute travels regularly to the Kurdish regions of the Middle East conducting research as events unfold, and is thereby able to contribute accurate up to date research.

The report surmises that the future of Iraq as a nation state is in question as never before and if its three main communities cannot find an effective formula for political cohabitation then the country may face partition with unpredictable consequences for the wider region.  Key to Iraq’s future will be in the policies and actions of the Kurdistan Regional Government (KRG). The Kurdistan Region is the best governed and least dysfunctional part of Iraq, with a developing democratic culture and relatively stable economy. It is professionally and effectively defended by its national guard, the Peshmerga, and is a haven of tolerance in a wider region where extremism and instability are on the rise.

Professor Stansfield’s research shows that the Kurdistan Region of Iraq has changed from being a geopolitical anomaly in the Middle East to a reality. In the committee report he clarifies the Region’s relationship with the rest of Iraq.

He said:“The relationship with the rest of Iraq is currently very strained and the situation may be reaching a point of inflexibility. While UK government policy remains focused upon maintaining the integrity of the Iraqi state, regional dynamics may be making this policy obsolete. This is because the Kurdistan Region finds itself in common association with Turkey and Arab Gulf states, which are countries that do not have positive relations with Baghdad.”

The report takes this forward in its summary in outlining that there can be no solution to Iraq’s current troubles unless the governments in Baghdad and in Erbil (the Region’s capital) work together to overcome mutual suspicion and acrimony. There is a role for the UK Foreign Office, as a friend and supporter of both administrations, and with its long history of engagement in Iraq, to try quietly to help mend fences, although there are doubts as to whether the UK currently has the depth of diplomatic resources in Iraq that it would need to carry out this role fully.

As stated by Professor Stansfield in the report, the Region remains in transition, moving from centralised political control to a more democratic setting. However, the transition remains fragile and needs supporting.

Professor Stansfield explained:“If the Kurdistan Region is to remain in Iraq willingly, three key issues need to be resolved: the federal structure and processes of Iraq; agreeing to an oil and gas law and revenue distribution mechanism; and the resolution of the disputed territories.”

The qualities that make the Kurdistan Region vital for Iraq’s future also make it a key ally for the UK government according to the report. It should respond positively to the KRG’s invitation to be its “partner of choice” on trade, education and cultural exchange as well as defence and intelligence matters, mindful that if it does not, the KRG may feel compelled to deepen links with other powers who may not share UK values.

The Foreign Affairs Committee report would also like to see progress in building stronger government to government links, to satisfy the KRG’s enthusiasm for UK mentoring.  This may include matters such as public service reform and developing a human rights culture; direct air links between the UK and Erbil; and (in the expectation that current security concerns will ultimately be overcome) in encouraging greater trade and business engagement between the UK and the Region.

The report agrees with the UK Government that for the time being it is far better that Arabs and Kurds in Iraq seeks to be strong and united, to defeat the common enemy of ISIL. It is also rational to be concerned about the possible consequences of Iraq’s break-up.

One of the report’s numerous suggestions include, that the UK and its international partners should stand ready to help ensure that any clear expression of will in favour of independence, and on reasonable terms, is accepted and respected. For the sake of wider energy security, it is also in the UK’s interests that the Kurdistan Region, along with the rest of Iraq, should have a vibrant oil and gas export industry.