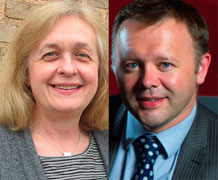 Linda Clare (left) and Gareth Stansfield (right) have been recognised for their work in the social sciences.

Two leading academics from diverse fields at the University of Exeter have been appointed as Fellows of the Academy of Social Sciences.

Linda Clare, Professor of Clinical Psychology of Aging and Dementia, and Gareth Stansfield, Al-Qasimi Professor of Gulf Studies and Professor of Middle East Politics, were both named among the latest wave of leading academics to receive the prestigious accolade.

Professor Clare leads the Centre for Research in Ageing and Cognitive Health (REACH), which aims to improve the lives of older people and people with dementia through research. Its broad research aims are maintaining cognitive health in later life and living well with cognitive impairment and dementia.

Professor Clare said: “I am honoured to be among the newly appointed Fellows of the Academy of Social Sciences, which makes a vital contribution to supporting research and scholarship in our field.”

Professor Stansfield has been a regular commentator and adviser on Middle East politics over the last decade, focusing in particular on the politics and political economy of Iraq, the Kurdish regions of the Middle East, dynamics of Gulf/Arabian peninsula security, and questions of post-conflict stabilization and nation/state building. He is is one of a handful of academics to have lived and worked in pre-regime change Iraq for an extensive period of time, between 1996 and 2001, and has considerable fieldwork experience in a range of countries in the Middle East and Islamic World.

The new Fellows have been recognised after a thorough process of peer review for the excellence and impact of their work in the social sciences.