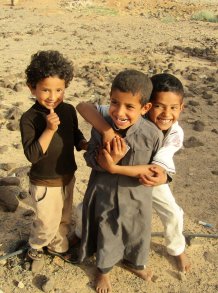 Pippa spent 9 months in Jordan from September until June last year studying Arabic at the Qusid Institute in Amman. It was an intense experience for her. Her language skills improved a lot during her time studying there, also helped by her involvement as a volunteer with a humanitarian charity, Humanitarian Family Aid. This volunteer run NGO is based in Amman and supports refugees displaced there from countries such as Sudan, Yemen, Syria and Iraq. During her time volunteering Pippa helped deliver water containers to refugees as well as by taking photos for the charity.

Winning the prize will help Pippa return to Jordan in April for a few weeks to brush up on her languages skills whilst catching up with friends and contacts she made whilst studying and volunteering there. She also plans to donate some of the prize money  to the charity where she volunteered. She said, ‘Winning the prize is also helpful as it is good publicity for Humanitarian Family Aid. They are grass roots organisation who use 100% of the money they raise for their work and so publicise their cause through free channels such as Facebook & Instagram using photos to tell the story of their work.’

In the future Pippa would like to use her degree and experience to help her gain a job with the foreign office or with a Middle Eastern based NGO.

The Year Abroad Photography Prize has been running since 2003. It is funded by alumnus David Pryer, (Government & Law 1968) who spent time working in the Middle East in the late 70’s /early 80’s. The competition gives students an incentive to record their experiences in their year abroad and the opportunity to share them with others. David returns each year to present the prizes at the December IAIS Social.

2016 2nd and 3rd prizes were awarded to Samuel Jennings and Natasha Worthington.