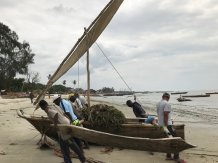 The first detailed academic study of East African maritime traditions shows changes in boatbuilding techniques but the continuing use of wooden vessels by fishers.

Researchers have documented the watercraft using the Zanzibar Channel – using photogrammetry technology - which so many livelihoods depend.

Large local vessels – the mtepe, dau la mtepe, and even the larger jahazis – have long left the Zanzibar Channel because of the development of modern transport infrastructure, the end of the mangrove-pole trade, and the changing political economy of the wider Indian Ocean.

Experts have recorded how boat builders are using newly available propulsion technologies – the out- board and, to a lesser extent, the inboard engine.

Experts conducted surveys in 2018 on Unguja, the principal island of the Zanzibar archipelago, and in 2019–2020 in Bagamoyo, mainland Tanzania to show the range of wooden fishing and cargo-carrying woodcraft in the region.

Scholars had warned the wooden watercrafts in East Africa would decline and disappear. The large ocean-going vessels of the monsoon trade – connecting Somalia, southern Arabia, the Arabia-Persian Gulf and South Asia - have been absent for more than 50 years.

Fishers use the ngalawa for a variety of types of net and line fishing depending on the season and the size of the fish. In the prawn season, at the end of the kaskasi (northerly) monsoon, they sometimes use their vessel simply as a means of reaching estuarine shallows, where they disembark and use a fine hand-held net to catch small prawns.

The mashua ndogo is rare – researchers encountered only two, one each in Bagamoyo and Mlingotini – because of the size of tree needed and particular skills required in joining the logs, but also because it is considerably more expensive to make than other dugouts.

The boti la mtando, ngwanda, and diminutive dingi represent a relatively recent innovation in both boatbuilding and fishing method in the Zanzibar Channel. They have outboard engines and portable electric generators to enable new fishing techniques, based around seine-netting and purse-seine netting and the use of artificial light to attract fish at night. Such equipment also place fishers in potential conflict with regulators over fish-stock conservation: some fishers themselves also express concerns about its impact.

Dr Cooper said: “We met fishers, seamen and maritime officials with clear opinions about, and curiosity towards, the historical and cultural dimensions of their watercraft, many expressed an unsentimental willingness to dispense with what they saw as cumbersome and limiting technologies, such as the sail, for more enabling ones, such as the outboard motor, should their personal economic circumstances allow.

“Equally, fishers are aware of the limitations that the dugout ngalawa and mtumbwi, for example, place on their fishing range and catch. What keeps all the wooden water- craft of the Zanzibar Channel in play are the material and technical affordances available to their makers and owners, and the economic possibilities they enable. The fate of these craft no doubt depends on such critical factors as national forestry management policies and the price of timber, the economic competitiveness of fibreglass and metal boats (both rarities today), the regional management of fish stocks, and the alternative livelihood opportunities open to an increasingly educated younger generation. It would take a particular nautical luddite to condemn a practitioner’s abandonment of the vessels described above in pursuit of a better life.”