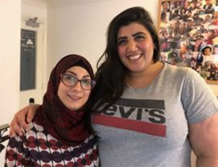 On 8 March 2020, Dalal al-Mousalli and Sharifa Hashem will be making history in the South West.

For the first time, a local radio programme will be produced and broadcast in both Arabic and English to a global listening audience.  Dalal and Sharifa will ‘Occupy the Airwaves’ on Phonic FM from 11am-12pm as part of the International Women’s Day  activities planned by Dreadnought South West, a regional arts-based feminist organisation.

Dalal and Sharifa’s aims: to inspire Arab and Muslim women to find strength and confidence, and to challenge public perceptions.

IAIS is immensely pleased to be sponsoring radio broadcast training at for Dalal, who moved to Exeter with her family as a refugee from Syria in 2017.  In the coming months, Dalal will participate in a bespoke training programme developed for Dreadnought South West by Exeter Phoenix, a local multi-artform venue and creative hub. Dalal will learn radio production skills including podcasting, interviewing techniques and sound editing, which will allow her to extend her previous work in journalism to reach new audiences.

On International Women’s Day, Dalal will partner with Sharifa – an IAIS alumnus (MA Gender and Identity in the Middle East, 2008) – to co-host a radio programme that dispels myths about women from Arab and Muslim countries. During the hour-long broadcast, they will integrate in-studio dialogue with Arabic music, bringing new sounds, experiences and ideas to their listening audience.  Dalal intends to continue carving out a space for the voices of Arab and Muslim women on the radio, which she sees as a medium that fosters both communication and connection.  ‘Freedom’ drives her vision: whether as a counter to representations of Muslim and Arab women as oppressed, or as a type of personal confidence and strength made possible by hearing other women’s stories.  For Dalal, the programme on 8 March will be a first step toward developing a regular Arabic language programme on Phonic FM with her partner, Khaled.

Watch this space for updates on Dalal’s radio programme and opportunities to get involved with community projects!

And please join Dalal and Sharifa, Dreadnought South West and IAIS to mark International Women’s Day on 8 March 2020.  Catch us on the airwaves of Phonic FM (live at 106.8FM or via phonic.fm) from 8am-midnight, or stop by Exeter Phoenix for activities in the Workshop from 11-5 and an open-mic celebration – Fearless Women Live – later in the evening.

We hope to see you there!