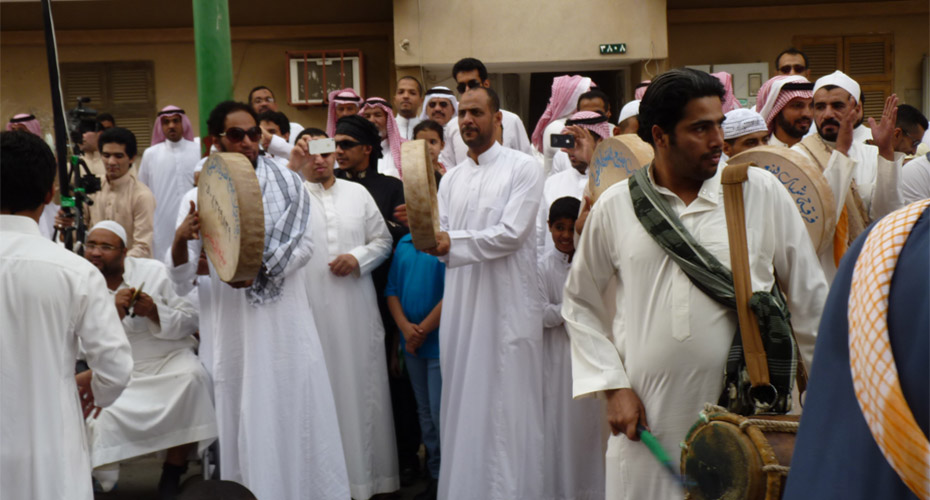 Street music and dancing – re-enacting the Songs of the Sea once sang and danced on board ship at Yanbu al-Bahr 2013 (photo. D. A. Agius)

The Songs of the Mariners Project

Funded by the Saudi Commission for Tourism and National Heritage, Riyadh, King Abdulaziz University, Jeddah and the Seven Pillars of Wisdom Trust (2018-2020)

I have been collecting sea poem/songs for the past decade in various places on both the African and Arabian shores of the Red Sea. However, these traditional sea songs are no longer being sung as part of the working day; the last practitioners are very old and long retired. Even though efforts are made by the younger generation to remember them, the words of the poem/songs are slowly being forgotten and new improvised versions are appearing. It is, therefore, of pressing importance to capture the last remnants of the original sailors’ songs before they become mere pastiches. The project is headed by myself, assisted by two former doctoral students of Exeter: Dr Muhammad Alhazmi, presently Assistant Professor of Arabic at Medina University and Dr Sultan Almujaiwel, Assistant Professor of Arabic Linguistics at King Saud University, Riyadh. The plan is to conduct more ethnographic fieldwork in the Hijaz region to audio and video record the poem/songs; write the music of the songs; document and study the language and terminology, their origin and provenance and collect oral and archival data on the cultural history of the mariners and singers by and at sea.