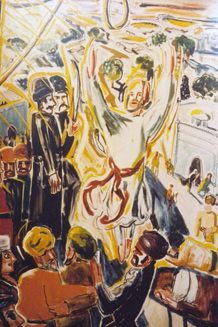 In 2016 the centre organised a three day conference, Sufis and Mullahs: Sufis and Their Opponents in the Persianate World.

Centre for Persian and Iranian StudiesEvents

There are no current events to display, but please come back soon for updates.

Archive of past events

An archive of past conferences and events in the Centre can be found below. There is also a listing here.

Sufis and Mullahs: Sufis and Their Opponents in the Persianate World

Sufis and Mullahs: Sufis and Their Opponents in the Persianate World

Opposition to Sufism and persecution of Sufis have been unfortunate facts of Islamic history for over a millennium. Many reasons for this opposition exist. Fundamentally, the conflict is rooted in differences of metaphysical and theological perspective – constituting an opposition between esoteric and exoteric modes of thinking. Although Muslim jurists, theologians and Sufis share similar ethico-spiritual and devotional concerns, the epistemological, theosophical and metaphysical interests of the Sufis usually completely differed from those of the jurists and the theologians who practice apologetic theology (kalam). The Sufis emphasise intuition (dhawq), inspiration (ilham) and mystical unveiling (kashf) as valid modes of esoteric knowledge (ma′rifa), use a secret symbolic language (lisan al-isharat), and express themselves through ‘words of ecstasy’ (shathiyyat) and erotic poetry, while the latter’s ideational framework depends overall on reason (’aql), logical demonstration (burhan) and a variety of rationalist approaches and disciplines.

With the controversial trial, and later, martyrdom of Mansur al-Hallaj in 922, the science of Sufism (’ilm al-tasawwuf) itself became severely contested by members of the orthodox Sunni religio-political establishment. Members of the Baghdad School of Sufis were persecuted in a series of inquisitions (mihan) conducted by the popular preacher Ghulam Khalil, who had accused them of being heretical antinomians (ahl al-ibaha). This was just the beginning of what was to become a contest between two quite separate visions of religion: a hardline legalistic, often puritanical, scripturalism promulgated by the exoteric theologians (’ulama al-zahir) and a tolerant, ecumenical, and broadminded intuitive approach to Islam advocated by Sufis whose vision of Canon Law of Islam (shari’a) accentuated the interior dimensions of its dogmas, rites and rituals, believing that God is better approached and apprehended by internal remembrance of the heart (dhikr), especially when amplified by listening to erotic poetry sung to musical accompaniment (sama’), than through legalistic speculation, ratiocination and logical argumentation.

With the rise of state-sponsored extremist Shi‘ite clericalism under the Safavids in the sixteenth and seventeenth centuries, most of the Sufi Orders were suppressed and driven out of Persia. A whole literature of anti-Sufi polemics was generated from the mid-sixteenth down to the early twentieth century in Persia, the social after-effects of which can be seen today in the current widespread destruction or state expropriation of Sufi shrines on the part of hardline Shi‘ite clerics in the Islamic Republic of Iran during the past three and a half decades, and the ongoing persecution, harassment and imprisonment of Sufis there.

On the literary level, many centuries before the rise of the Safavids, in classical Persian Sufi poetry one finds a similar opposition between juridical and Sufi Islam expressed in poetic imagery and figures of speech, a contested religious vision from which was generated several rich genres of satirical anti-clerical poetry in Persian known as ‘Songs of Infidelity’ (Kufriyya), ‘Wild-man Poetry’ (Qalandariyya) and ‘Sufi-Zoroastrian-symbolist verse’ (Gabriyya).

Bringing together scholars and specialists on Sufism from around the world, this conference, focused geographically on the Persianate world of greater Iran, Anatolia, the Ottoman Empire, and Central Asia, aims to examine the theological, philosophical, and literary dimensions of the Sufi/anti-Sufi conflict as much as its socio-historical causes and origins

(AHRC) Classical Persian Poetry & poets: The Timurid & Turkmen Periods - Dr Leonard Lewisohn
30 March 2013
The workshop focused on the life, works and thought of all major and some of the minor poets who flourished during in the late Mongol, Timurid and Turkmen periods (roughly the 14th-15th centuries) when most the models of classical Persian poetry were perfected, and during which many major Persian poets flourished. Participants discussed and revisited the quite different conclusions regarding the decadence or deviance of the poets of this period that scholars have reached. Some of issues raised by the speakers included: intertextuality in Persian poetry; bachannalian and wine symbolism; eroticism and doctrines of love; Ibn Arabis theomonism; development of poetic genres; and the politics of patronage on Persian poetry.