Shah 'Abbas I and the Great Shrines of the Safavids

Network of British Researchers and Practitioners of Islamic Law 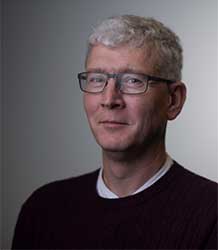 Rob Gleave is Professor of Arabic Studies in the Institute of Arab and Islamic Studies. From January 2023 until January 2026 he will be British Academy/Wolfson Professor with the research project “The Foundations of Modern Shi’ism: The End of Akhbārism and the Beginnings of Uṣūlism”. His CV is here and his publications list is here.

His research focuses on Islamic legal theory and practice, particularly legal hermeneutics, and the history of Shi’ite legal thought and institutions. He has directed a number of international research projects over the past 20 years exploring these issues. Details of his publications and projects can be found via the "publications" and "research" tabs on this page.

His most recent research projects, both of which concluded in 2022, were:

His past research projects have included:

Understanding Shari’a: Past Present Imperfect Present; this two-year project (2016-2018) was funded by the Humanities in the European Research Area consortium as part of the “Uses of the Past” programme.

Islamic Reformulations: Belief, Governance, Violence, a 3-year project (2013-16) funded by the Economic and Social Research Council examining questions around the reformulation of notions of belief, governance and their relationship to violence in contemporary Islamic thought.

Legitimate and Illegitimate Violence in Islamic Thought (www.livitproject.net) was a 3-year programme (2010-2013) funded by the ESRC examining how violence has been justified in Islamic intellectual history of Islam, and has produced the series of the same name, published by Edinburgh University Press.

Rob Gleave has been visiting fellow or scholar at the universities of Michigan (Ann Arbor), Oxford, Washington (Seattle), Meiji (Tokyo), Tehran, Chicago and at the Institute of Advanced Study, Princeton.

Within the University of Exeter, as well being Director of the International Institute for Cultural Enquiry and Director of the Centre for the Study of Islam, he has also been: Associate Dean of the College for Social Science and International Studies 2015-16 and Principal Investigator on the University of Exeter ESRC Impact Acceleration Account (ESRC-IAA) from 2014 to 2018.

My primary research interests include:

My past major funded projects include:

Understanding Shari’a: Past Present Imperfect Present; this two-year project (2016-2018) was funded by the Humanities in the European Research Area consortium as part of the “Uses of the Past” programme. It was a collaboration between the universities of Exeter, Gottingen, Bergen and Leiden, with a team of lead researchers and postdoctoral fellows in each centre. The project examines the ways in which the notion of a “perfect past” informs programmes of reform of the “imperfect present” in Islamic legal thinking. The Exeter-based postdoctoral research fellows on this project were Dr Omar Anchassi, and Dr Sejad Mekic.

Islamic Reformulations: Belief, Governance, Violence, a 3-year project (2013-16) funded by the Economic and Social Research Council as part of the PACCS programme. Islamic Reformulations examined questions around the reformulation of notions of belief, governance and their relationship to violence in contemporary Islamic thought. The research fellows on this project were Drs Sarah Elibiary and Mustafa Baig.

Legitimate and Illegitimate Violence in Islamic Thought (www.livitproject.net) was a 3-year programme (2010-2013) funded by the ESRC as part of the Global Uncertainties Programme.  The project examned how violence has been justified in the intellectual history of Islam, and has produced the series of the same name, publiced by Edinburgh University Press.  The research fellow on this prpoject was Dr Istvan Kristo-Nagy.

British Imams Going Green, funded by the ESRC Exeter Impact Acceleration Account, this two-year project examines how challenging climate change can be integrated into Muslim faith practice in the UK.  The Postdoctoral Research Fellow on this project is Dr Davide Pettinato.

Islam and water management in a changing climate: building ‘faith-based evidence’ – a six-month project, funded by the GCRF Facilitation Fund, examining religious engagement with climate change in the Muslim world, with a focus on Tunisia, and in collaboration with  Institut des Régions Arides (Tunis) and the  Centre for Water Systems (Exeter).  The postdoctoral research fellow on this project is Dr Davide Pettinato.

GW4 Accelerator Award: Understanding Religion and Law: Fatwas, Muftis and Law in British Islam (www.britishfatwas.co.uk) was a two-year (2015-2017) collaboration of the universities of Exeter, Bristol, Cardiff and Bath. The project established a network of researchers on religion an law between the 4 universities, focussing on the role of the mufti and the importance of the fatwa in the British Muslim community. The research fellow on this project was Dr Tayyeb Mimouni.

The Hawza Project: Shiite Seminaries in Iraq and Iran, (2009-2013) funded by the British Academy under the auspices of the British Institute for Persian Studies, this project examined the history and operation of the Shi’ite seminary system (the Hawza) focussing on the seminaries in Qum (Iran) and Najaf (Iraq).

The UK Network of Practitioners and Researchers in Islamic Law; a two year project (2007-2009), funded by the Arts and Humanities Research Council to increase contact and collaboration between academic experts and legal practitioners working in Islamic law.

Since 2005, he has managed international research projects with budgets totalling over £5 million.

Postgraduate research topics I have supervised include:

Rob Gleave serves on the editorial boards of a number of journals and is sub-editor of Islamic Law and Society and the Journal of Abbasid Studies.  Amongst his appointments, he has been Executive Director of the British Society for Middle Eastern Studies, Secretary and President of the British Institute of Persian Studies, and President and Secretary of the International Society for Islamic Legal Studies.  He was also chair of the Steering Group for Islamic Studies, 2008-2011, a precursor to the British Association for Islamic Studies (BRAIS).