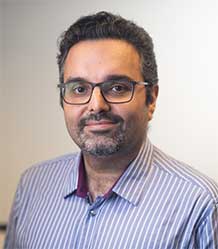 I'm an intellectual historian who is interested in the course of philosophy in the Islamic world both past and present. Increasingly I am interested in how that study and category of philosophy coincides with the emergent category of global philosophy. In terms of method, my research is informed by the need for a decolonial and reparative study of Islam.

I supervise graduate students broadly in Islamic intellectual history, especially in philosophy, theology and Quranic exegesis. I am the director of the Centre for the Study of Islam.

I work on Islamic intellectual history in the wider Persianate world. My particular interests which grew from my PhD at Cambridge on the philosophy of Mullā Ṣadrā Shīrāzī (d. c. 1636) lie in post-Avicennan philosophical, theological and mystical traditions. My second main area of interest is Qurʾanic exegesis and textual hermeneutics.

I am currently interested in three projects: completing an intellectual history of philosophical traditions in Iran and North India in the 18th century, a diachronic study of the philosophy of time in Islamic thought, and the reception of some European philosophies in the postcolonial Muslim context. On this last project, I have embarked on a seed project with case studies of Turkey, Iraq, Iran, and Pakistan supported by the European Network Fund.

With a former student and colleague Ahab Bdaiwi, I am editing the Oxford Handbook of Shiʿi Islam, as well as an exciting new series of translations of Islamic intellectual traditions for Hackett Publishing.

I have advised various government departments and private sector concerns on Iraq, Iran, Shiʿi Islam in the Gulf, and Islam in Britain and Europe.

I also run a blog that has my various musings on philosophy both Islamic and otherwise as well as notes on manuscript research and related critical editions. The blog entitled Hikmat is available here.

My research interests lie mainly in four concurrent (and I hope complementary) areas:

1. Islamic philosophical traditions in particular Mulla Sadra (d. 1636) and Safavid philosophies. I am interested in a number of intersecting problems: first, the relationship between philosophy and other intellectual disciplines such as theology and rational mysticism; second, the course of Neoplatonism(s) in later Islamic thought; third, concepts of the self and self-reflective understanding of philosophy in Islamic culture; fourth, problems of epistemological systems in later Islamic thought; fifth, the legacy of Safavid thought in particular in India; sixth, philosophical theology, the God-world relationship and the possibility of God-talk; and finally, what implications does Sadrian philosophy have for contemporary philosophy and theology in the world of Islam?

2. Qur'anic studies and textual hermeneutics. How do interpreters confront and envision the text? How does one make sense of the exegetical traditions in Islam? I am particularly interested in Sufi and Shi'i experiential and mystical exegeses and hermeneutics of the text.

3. Shi'i theology of all three branches. I have been interested for some time in the relationship between Mu'tazili thought and Shi'i theologies and am focused on three areas: first, the non-Mu'tazili Zaydi tradition exemplified by Sayyid Humaydan b. Yahya (fl. 13th century); second, the development of Twelver traditions of philosophical theology focusing on the role of Nasir al-Din al-Tusi (d. 1274) and al-'Allama al-Hilli (d. 1325); and third, the development of Ismaili thought in the pre-Alamut period.

4. Philosophy and theology in the contemporary Muslim world and how in particular more 'traditional' seminarian style learning intersects with the influence of modern science and European philosophies.

I am happy to supervise research students in Islamic intellectual history and the history of Islamic Philosophy, Qur'anic studies, Shi'i thought and aspects of contemporary Islamic thought.

I have successfully supervised the following doctoral projects:

Kemal Argon, An Intellectual History of Islamism in Pakistan - 2010

Babar Ahmed, Toward a Rational Hermeneutics of Islam - 2011

Ghazoan Ali, Substance and Things: Dualism and Unity in the Islamic Cultural Field - 2012

Ahab Bdaiwi, Shiʿi Defenders of Avicenna: An Intellectual History of the Philosophers of Shiraz - 2015

Christopher Pooya Razavian, The Discursive Self: Rethinking the Relationship between Autonomy and Tradition in Shiʿi Thought - 2015

Ahmed al-Malik, Orientalism and Occidentalism in the Arabic and English Novel - 2015

I am currently supervising the following doctoral projects:

Farhan Zaidi - The Ontology and Epistemology of Revelation in Mullā Ṣadrā

Hayder al-Jafari - Selfhood and Qurʾanic Hermeneutics in the Contemporary World

I come from a Twelver Shi'i background, on my father's side from a family of Razavi sayyids originally from Khurasan who settled in North India.

After a liberal education at Westminster School (1986-91), I read modern history at Christ Church, Oxford (1991-1994) where I developed an interest in philosophy and in particular Islamic philosophy. At the time, because my interests were in the modern world, I read Modern Middle East Studies for an MPhil, staying in Oxford (1994-1996), specialising with a dissertation on philosophy in 19th century Qajar Iran.

I then decided to continue the study of philosophical traditions by focusing on the Safavid period and moved across to the other place. At Pembroke College, Cambridge, I eventually wrote my doctoral dissertation on the philosophy of existence in the thought of the Iranian Safavid philosopher Mulla Sadra Shirazi (d. c. 1635), obtaining my PhD in 2000.

I spent a post-doctoral year as the first fellow in the new Quranic Studies unit at the Institute of Ismaili Studies in London.

I then taught for 2 years in the Department of Theology and Religious Studies at the University of Bristol. I have been teaching at the IAIS since 2004.

As a historian, I think that one ought not to escape one's positionality with respect to one's inquiry, its method and subjects.