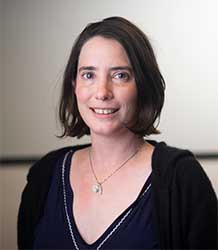 Emily Selove (PhD 2012, UCLA) is a senior lecturer in Medieval Arabic Language and Literature at the University of Exeter. Her early research focused on the figure of the uninvited guest (or "party-crasher") in medieval Arabic literature, and especially on the 11th-century work Ḥikāyat Abī l-Qāsim, the subject of her monograph, Ḥikāyat Abī l-Qāsim: A Literary Banquet (Edinburgh University Press, 2016). She also co-edited and translated this text with Professor Geert Jan van Gelder: The Portrait of Abū l-Qāsim al-Baghdādī al-Tamīmī (Gibb Memorial Trust, 2021). Her translation of another 11th-century book of party-crashing is titled Selections from the Art of Party-Crashing in Medieval Iraq.  She also co-authored textbook to introduce beginning students to the city of medieval Baghdad, Baghdad at the Centre of a World: 8th-13th Century,  and has created a collection of cartoons titled  Popeye and Curly: 120 Days in Medieval Baghdad to accompany this textbook: www.amazon.co.uk/Popeye-Curly-Days-Medieval-Baghdad/dp/1944296190/ref=sr_1_1. She is currently writing a short monograph for the Cambridge Elements series titled The Donkey King: Asinine Symbology in Ancient and Medieval Magic.

Dr Selove was a postdoctoral research associate at the University of Manchester from 2012-2014, working on the ERC-funded Arabic Commentaries on the Hippocratic Aphorisms project. She has articles published and in progress on medieval Arabic medicine and magic. Her article "Magic as Poetry, Poetry as Magic: A Fragment" in Magic, Ritual, and Witchcraft, 2020, explores an area of special interest to her research: the overlap between poetic and magical language. She is currently the PI of a Leverhulme-funded research project, "A Sorcerer's Handbook," which will create an edition, translation, and literary study of Sirāj al-Dīn al-Sakkākī's (d. 1229) magic handbook, Kitāb al-Shāmil wa-baḥr al-kāmil: blogs.exeter.ac.uk/thesorcerershandbook/

She is also the convener of the University of Exeter's Magic and Esotericism research group: blogs.exeter.ac.uk/magic/

I am happy to supervise projects about magic, medieval Arabic literature (adab), and the influences of Greek and Roman literatures on these traditions. I am also interested in the receptions of medieval Arabic writing in both medieval and modern Europe.

Baghdad at the Centre of a World, 8th-13th century: An Introductory Textbook

The city of Baghdad during the 8th to the 13th centuries CE was one of the most important centers of cultural production in human history. A melting pot of languages, religions, and ethnicities, it produced thinkers and artists whose impact on the sciences, literatures, and cultures of the Middle East and Europe is still felt today. In countries like the UK and the USA, however, the importance of this time and place in human history is often barely mentioned in schools. This textbook will provide teachers with reliable and engaging material with which to introduce the dynamic medieval city of Baghdad to their students; it can be used by both students in school or by introductory level university classes, depending on the amount of support provided by the teacher to readers of the textbook. Included among the authors of this textbook are some of the leading names in the field, all conducting ground-breaking research on the history, culture, religion, and writing of this city.

Enjoy one hundred and twenty scenes from the vibrant city of Abbasid Baghdad, starring book-loving author Popeye (Al-Jahiz) and winebibbing poet Curly (Abu Nuwas), along with their friends Coral (a singing girl) and the Caliph of one of the world's most influential empires in history. Each episode is derived from historical sources, and designed to entertain, educate, and amaze.